Blindspots that cause failure…

Hey guys, John Gregory here out of Sydney, Australia. I just wanted to cover a break-thru concept that when I discovered this I started to have the financial success I always dreamt about. This concept really creates so many blind spots in the lives of so many marketers online today. Whether you’re in network marketing, affiliate marketing, or whatever it is, this is a concept that a lot of people don’t even get. And it’s because it works into that place in their life that we call blind spots.

Here’s a scenario for you. Imagine you’ve got a pie. Imagine this is a big pie. And what I want to talk about is dividing this pie up because this pie is actually your life and it’s actually really the lives of people all over the world and what they know.

The first part of the pie, just imagine a little, little sliver, just a little sliver like the kind of sliver that maybe your mum would give you before dinnertime just if you’re a little bit hungry and you just want to have a little snack, just to wade off that hunger before you’re going to have your real dinner.

Can you imagine what kind of slice that would be in a big pie? That is what we know we know, in terms of what there is to know on the entire planet. What we know we know is just that little sliver. And then there’s another sliver that’s just pretty much, you know, just a little bit bigger than that and that’s what we know we don’t know.

But what I really want to talk about is the stuff that they don’t know they don’t know. And what a lot of people are not knowing is that there’s a way of actually positioning yourself online in a certain type of program that’s going to allow the 97% of people that are out there struggling right now to start having a lot more success than they’re currently having.

For instance, in the average network marketing business – network marketing, MLM or whatever you decide to call it – you need to have literally an army of people in your organization before you start making an average income. Now, you know, for that to happen, you’ve just got to create momentum. And you’ve got to get a whole lot of people following a system and staying consistent in the game for as long as it takes.

The average person never gets there. It’s like filling up a bucket and there’s big holes in the bottom. And as soon as they put someone in the top, another person runs out of the bottom. It’s like they’re pouring water in, they’re pouring water in, trying to build their business, trying to create an income, trying to create or get momentum, and it’s coming out of the bottom just as fast as they’re putting it in. So, ultimately, they just never get to the point where they start earning a residual income.

Now, what I want to propose to you is the concept of getting paid today. The concept of actually earning $1,000 to $3,000 for every single person that joins you. See, when you get paid $1,000 per member, it’s not about putting in 10 or 100 or 1,000 people before you start getting $1,000 checks on a weekly basis. You know, one person in and $1,000 out. Ten people in, $10,000 out. And then you start to get organizational growth and organizational duplication, which pulls out thousands and thousands of dollars on a weekly basis.

And I know that since I got started in some programs that actually have the ability to pay me $1,000 to $3,000 for every single member that joins me in my business, I’ve started to have a life where I can survive on this industry. I can make a full-time income from home.

So, you know, the real point of this blog is really opening up your mind. And I can go a lot more into depth. I do want to keep this video a little timely too. I really encourage you to check out some of the top tier programs; some of the programs can allow you to earn $1,000 per sale, to make $1,000 a week just with one sale. And once you start to get 2 and 3 and 4 and 5 sales, I mean, you start having those $5,000 weeks and $10,000 weeks. And that’s a real secret that most network marketers really don’t understand because they’ve been taught the concept of multi-layers and having to build an organization.

And there’s nothing wrong with that. But I just say that the average person that is really trying to make something in this industry they need to get with a get paid today program; a program that is going to allow them to start making money today so they’re actually in the game for as long as it takes. For the next 2, 3, 4, 5 years, to get the momentum, to get the credibility, and to get the following that it’s going to take to start to build a long-term residual income.

So I’m going to leave it there guys. I’m going to blog about little concepts like this. I hope this has helped you. Please comment below if you have got some value out of this. And I hope you’re having a very profitable day, and I’ll see you again soon. Bye for now. 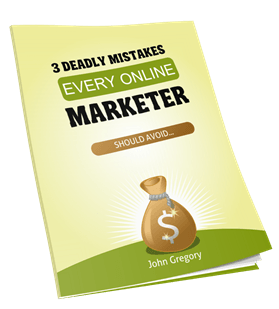